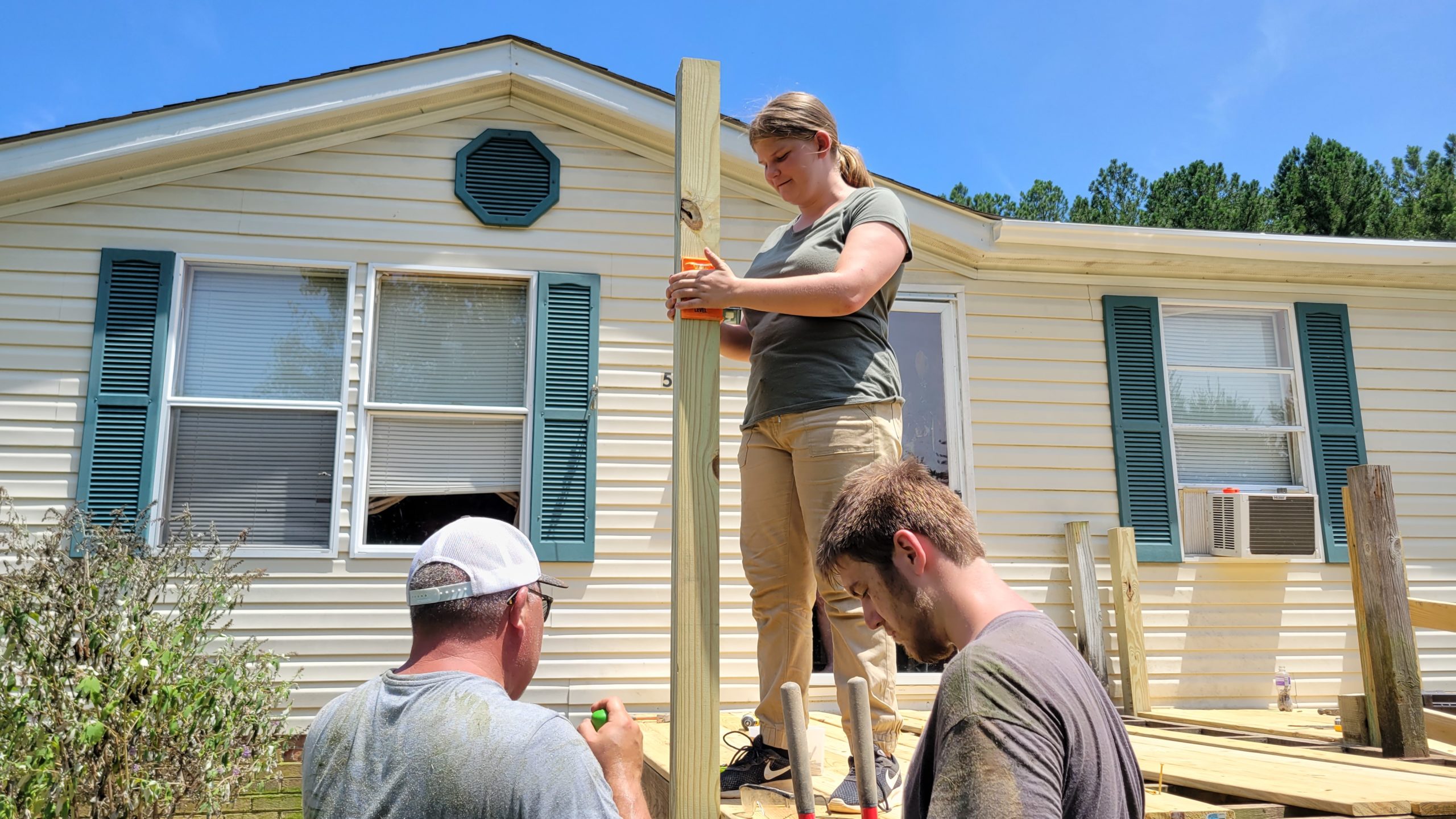 Now in its 35th year, Carolina Cross Connection puts young people on the front lines of social change – with a new emphasis on serving communities of color.

Of all the ways Caroline Vassil could choose to spend her summer break, you might think sawing lumber would rank somewhere near the bottom of the list.

Yet here she was on a July afternoon in rural Gaston County, sizing up boards to install a wheelchair ramp at the home of an elderly couple. Under a blazing sun, with temperatures reaching into the mid-90s, Caroline was exactly where she wanted to be.

“It’s actually pretty fun to build all this stuff,” she said. “You learn all these skills you can’t really learn just playing at the pool.”

In rural, isolated corners of North Carolina, youth volunteers like Caroline deliver hope and find inspiration in God’s call to love our neighbors.

It has been this way since 1987, when CCC debuted its first summer mission camp in support of folks who are some combination of disabled, elderly and economically disadvantaged.

When the workday ends, youth return to camp for worship, prayer and small group reflection on what they learned. Then it’s up at 7 a.m. to do it all again.

A central part of the mission is to build relationships with homeowners.

“It’s an eye opener, I guess you could say,” said Catie Black, who, like Caroline, is part of the youth group at Light of Christ UMC in Charlotte’s Ballantyne area. “Getting to meet the people we’re working with, and learn their stories, is the most rewarding part.”

CCC has welcomed 31,550 campers from as far away as Texas, Florida and New Jersey. However, 90 percent of the youth groups that attend camp are from United Methodist churches in North Carolina.

In February 2021, CCC confronted an uncomfortable realization. A diversity and inclusion team found that while the organization serves some of the poorest areas in North Carolina, a disproportionate number of projects had taken place in predominantly white counties.

In response, board leaders created goals and target areas to grow into communities with both high levels of poverty and racially diverse populations, to ensure that campers serve all of God’s children in a balanced way.

“We want to broaden the table – for more people to feel welcome and invited in,” said executive director Brittany Bethel, who joined the staff in 2004.

CCC operates an urban ministry in Asheville in partnership with Haywood Street Congregation. A third program, Overseas Ministry, sends young people to work in the Honduran villages of San Pedro Sula and Copan.

Camp has become more challenging in the pandemic era — but also more needed than ever. Students are suffering from loneliness and depression. Many have lost a meaningful connection with the church. At the same time, the needs of folks on the margins have only increased.

That’s why it’s so important for teens to see firsthand what it means to be the hands and feet of God.

“They learn a lot about the way other people live – and how we can better live together,” said Salem Sheridan, a former camper who now serves on the staff. “There’s not many times they’re able to be in a community focused on Christ and serving others. And they gain a lot of skills that are kind of cool.”

This year’s class of 26 participants and 21 graduates — along with the churches they serve — will be stronger and better equipped because of their commitment.

The Foundation celebrated present and future leaders and affirmed its commitment to building the Church for generations to come during an Annual Meeting of the Membership.